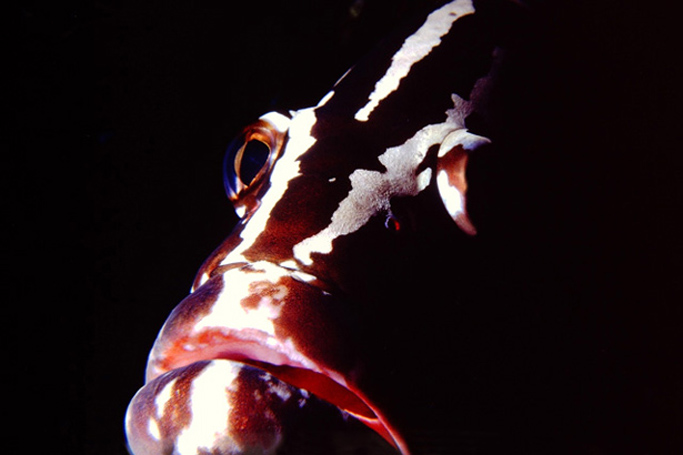 Technique: I used a 28 MM lens mounted on a Nikonis III body. Since I was close, 1 foot away and in a dimly lit cave, I switched the strobe to strobe to low power (thankfully). The film used was Kodak Ektachrome 64 ASA.

Summary: Lurking in the shadows of a cave off the Bahamian Island of Rum Cay, is a very large (80 lb) Nassau Grouper. They are a very curious and friendly fish. I refer to them as the "puppy dogs" of the ocean.

It’s amazing how taking pictures of one critter underwater will sometimes take you to your next subject. This was the case here. It’s rare that you catch a soldier fish outside its cave-like hiding place in the daytime, but I was shooting one and as he ducked for cover…look what I found!!!

You will often read a quote from a great friend that said: “a good photographer makes their good luck happen”. I’ll be honest with you here…I was the luckiest man on planet earth at this very moment. As luck would have it: I had a 28 MM lense so I could get close, the grouper let me get close, I had the good common sense to shift the power to low on the strobe (okay, that was skill), I was using a Kodak film which favored the color red (compared to other films) and made any dark blue background black, and I had a long arm on the strobe and extended it to the left and slightly in back of the grouper. What was really lucky, I fired the shot and startled by the flash, the grouper split. I only got one picture and this is it!