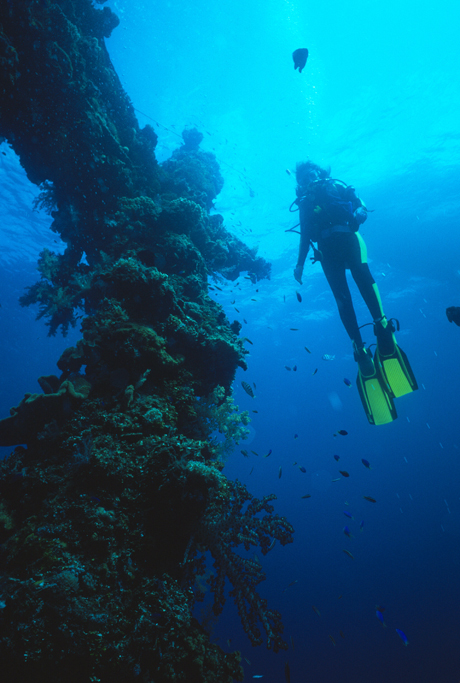 Technique: Photo was taken using a Nikonis III camera with a 15 mm Nikon "fish eye" lens, Camera distance from anemone in foreground is approximately 2'-3'. Strobe was fired on high power using modeling light to insure the anemone was properly lighted. Strobe is about 5' away from anemone. The diver is approximately 12' to 15' away.

The Shinkoku Maru is actually two wrecks. She was split in half during the attack. The forward hold in the bow section was full of mines that would have been used in harbors to sink the ships of the enemies of Japan. This attack was considered the U.S. retaliation for Pearl Harbor. Six aircraft carriers bombed and strafed the islands and ships over a three day period. Estimates have over 60 ships sunk and the entire airforce on the islands destroyed.

Just as I discussed the effects I was looking to achieve in “War At Peace“, I wanted a similar look to this shot. The sun piercing the surface behind the diver highlights her approaching the mast. The yellow fins, a color that holds it’s hue underwater, add just a hint of added color to the picture.